There is something attractive about the idea that the current crisis is caused by everyone being greedy. Everyone is to blame. I’m someone who carries more than my share of consumer debt, and I’m probably not alone. Many of us feel guilty about how much we eat out. Stuff like that. So it fits. But consider these two graphs. 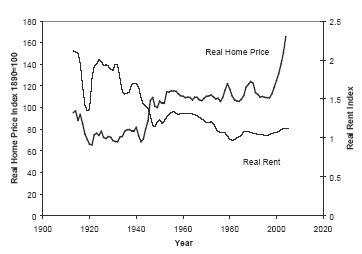 It might be hard to see, but from 1980 until the present, the cost of owning a home has gone up 42%. In the same period, the average wage has increased 5%. If housing cost is increasing so much faster than wages, does that create a problem of running out of buyers? A problem that was “solved” by inventing new mortgages and requiring less credit worthiness. Had we focused on making sure wages kept up with the cost of necessities, would we be in better shape? (Note: both graph are corrected for inflation.)

I commented, then realized I was squinting so hard to read the fine print that I missed the point of the over all graph. Never mind.

They aren’t the best graphs.

I realize that I now expect to be able to type in two terms and some units and have google give me the exact graph or image I desire. It irritates me with the housing graph runs to 2006 and the wage graph runs to 2008.

What does it mean to concentrate on making wages rise? How do you do that?

I’m not sure its a matter of wages should have gone up. It’s a matter of those who couldn’t afford a home shouldn’t have bought one. That also would have reigned in housing prices. Pretending like they could afford a home falls under the greed, I think. Greed might be too harsh. Wanting to believe something too good to be true.

“What does it mean to concentrate on making wages rise? How do you do that?”

I mean, lots of this is crap, I’m sure, but I’m a civil litigator–not an economist or policy wonk.

Point is, we can, and frequently do act through our government to influence the economy. Working to increase median compensation is surely something as doable as fighting inflation.

“It’s a matter of those who couldn’t afford a home shouldn’t have bought one. That also would have reigned in housing prices.”

Well, but people need homes. It seems like at some point we were at a cross road where home demand and therefore prices was stagnant and we concentrated on making borrowing easier rather than increasing wages.

What was the problem with market equilibrium?

No they don’t. People need places to live. It was a strange dedication to home ownership as an index of economic health that got us into this trouble in the first place.

Home ownership is fine, good even, but an orcish dedication to its pursuit for every man, woman and child is a strange goal.

A Home Ownership Index might be able to used as a proxy for economic health, but it’s not a driver of it.

Focusing on Josh’s comment about Acknowledging that this is a cause, and that I’m all but bs-ing here…

People need a place to live, and by many metrics the best place for them to live is a home that they own. There was nothing wrong with the principal of introducing policies to encourage home ownership. Like making hundreds of microloans to an entire community of central African entrepreneurs and farmers, pushing the minimal initial conditions to allow an individual to step over an economic boundary tends to produce pretty good rate of success, the cumulative effect sometimes being hugely beneficial to the society at large. I doubt strongly, though I don’t know this, that the crisis was precipitated by new families and hardworking wage earners with untested credit making a modest starter home purchase with favorable rates. Even if some chunk of those mortgages defaulted, they don’t drive the market or create the skyrocketing real estate inflation compared to wages.

Americans have trained themselves in the last X years to believe that they need or deserve a level of consumer excess beyond any rationality. Exurban McMansions commuted to in gargantucar SUVs and paid for by investment speculation not much more rational than a casino visit are legitimately a significant cause of the current meltdown. The problem was people who got into these home loans not because they needed a home, but because they thought that the short term, self propelled, pyramid inflation of real estate values would allow them to realize a substantial profit on a home purchase that was in every other sense impractical and ill-suited to a real valuation of sensible shelter and comfort. And city planners, developers, builders, realtors, and lenders were more than happy to oblige.

Even that condition might have collapsed without much concern if it hadn’t been compounded by the securities market basically turning grounded real investments in a tangible asset (a mortgage) into an untethered fiction that isolated the investors (whether its the bank executives or their shareholders) from any consideration of what they were actually trading. The securities were valuable to a buyer only because they would presumably be instantly more valuable to yet another buyer, whose own sense that they were valuable was only created by the first buyer’s enthusiasm to begin with.

The problem was people who got into these home loans not because they needed a home, but because they thought that the short term, self propelled, pyramid inflation of real estate values would allow them to realize a substantial profit on a home purchase that was in every other sense impractical and ill-suited to a real valuation of sensible shelter and comfort. And city planners, developers, builders, realtors, and lenders were more than happy to oblige.

Here’s my whole point on this, I think this statement is what we call a question of fact. I dont think it is the kind of thing we can’t be so sure of. I think we know people who are very responsible, people who are very irresponsible, and everyone in between. I’m personally familiar with unethical conduct by lender, probably short of technical deception but only just.

So, I’m not jumping up and down swearing about the evil lenders, I just cringe at the confidence some have in assigning blame to the folks losing their homes.

Jim- you’re absolutely right that it should be a question of fact, not opinion, and I do preface both my comments that I’m interpreting where I shouldn’t be. Partly because in reading the non-technical parts of the press coverage I’m having a hard time finding an explanation of the factual roots of the thing. In the more technical articles I’m having a hard time following it.

All of these factors seem to me like they were necessary conditions for the crisis — Predatory lending, overreaching home buyers, lax credit regulations, runaway real estate inflation, irresponsible securities investment speculation. I think that the lenders and the investors in some % of cases were probably criminally fraudulent or negligent or both, so I would definitely give extra weight to that.

Returning to your original post, I was just pointing out that I didn’t think it was a mistake to try to make a home purchase more accessible if sub-prime mortgages had been used as a focused solution to open a market to a specific class of home buyers who would otherwise have been just outside of the margins. Instead, the real estate bubble sounded just like the internet bubble, where I’m reading about these tract developments miles away from any infrastructure but a highway exit ramp where people were buying up lots under the theory that they’d never have to face the interest rate increase because in two years they’d renegotiate or simply sell again thanks to a magically infinite resale value.